Email me when stock is available...

For some time we have successfully marketed the TD5 Defender Auto kit and the natural follow on was the 2007 model TDCi. This was not a simple task and involved considerable development work. We can now announce we are able to convert the 2007 onwards TDCi Defenders from the 6 speed manual to 4 speed auto.

Since it was announced the Defender engine was being changed from the TD5 to the 2.4 TDCi we have been asked if an auto kit will be available, we started working on it straight away and bought a Transit 2.4 engine with manual gearbox to allow us to develop a prototype. In the past when we have made up a conversion kit it has been possible to utilise parts from related vehicles in the existing model range, eg some Defender parts, some Disco parts Etc. The 2007 Defender was a much more complex job involving much more design and manufacture than previous kits. Firstly there was no autobox that was a straight fitment to the new 2.4 engine (unlike the TD5) so we needed to make a bellhousing and flexplate assembly from scratch, also the transfer case has been rotated a further 10 deg from the previous position so new mounts were required. There were many small things like this, where with the TD5 kit you would just use a Disco part on the 2.4 it was a case of working out what you need then prototype, test, draw, sample, manufacture Etc.

As always with our conversions we try to keep as near to Factory spec/look as possible this involved keeping the engine and transfer case in “Factory position” so any conversion to automatic box must fit as a direct replacement for the manual box to avoid any propshaft or transfer case changes. The transfer case still functions as normal i.e, with the diff lock and high and low ratios.

We decided to use the well proven ZF 4HP22EH autobox which was used in the P38 Ranger Rovers and the Series 2 Discovery’s as we have considerable experience with these units and they are readily available. To fit the auto box to the 2.4 engine we manufactured our own bell housing, paying attention to length and orientation of the auto box allowing a “drop in” fit. It was also necessary to design and make a crank boss and flexplate assembly.

In order to give optimal performance of the auto-box we have developed a “stand alone” control unit called the Compushift . The controller takes signals from the throttle position sensor on the throttle pedal, the speed sensor in the autobox and the gear position switch on the side of the autobox, this information is fed to the ECU and the correct gear selected according to the preset “maps”.

This “electronic” control is a major step forward over the previous “hydraulic” auto-box conversion we had used in the earlier TD5. With this control unit we have a fully adjustable controller allowing us to “customise” or “map” the gear shift to suit each application. It is possible to map the individual shift points and shift pressure v.s throttle position also the torque converter lock up speed and a whole host of other variables.

A lot of consideration was given to the interior to ensure the conversion had a “factory” feel, we have previously made a 50th anniversary auto console but because of the changes to the 2007 dash a new consol was required. Our kit includes the Disco II shifter shown below. 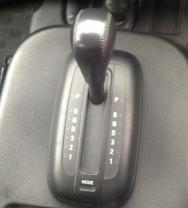 The kit will also fit the new 2.2 Defender TDCi.

The Defender Auto Plaque is not included the kit but is a nice addition. If you would like this please select from the dropdown menu.

The price shown is for the kit only however we are able to offer a fitting service for £5,520 plus vat and this price assumes we keep the manual gearbox. We would require the vehicle is with us for 7-10 working days. Please contact us directly to arrange a fitting appointment.

In order to calculate your shipping costs you will need to put the items in your shopping basket and confirm your delivery address. Once you have entered these details a shipping quote will be generated. Please do not proceed to the payment stage unless you are ready to order.

We use cookies on our website to give you the most relevant experience by remembering your preferences and repeat visits. By clicking “Accept All”, you consent to the use of cookies.
Accept All
Manage consent

This website uses cookies to improve your experience while you navigate through the website. Out of these, the cookies that are categorized as necessary are stored on your browser as they are essential for the working of basic functionalities of the website. We also use third-party cookies that help us analyze and understand how you use this website. These cookies will be stored in your browser only with your consent. You also have the option to opt-out of these cookies. But opting out of some of these cookies may affect your browsing experience.
Necessary Always Enabled
Necessary cookies are absolutely essential for the website to function properly. These cookies ensure basic functionalities and security features of the website, anonymously.
Functional
Functional cookies help to perform certain functionalities like sharing the content of the website on social media platforms, collect feedbacks, and other third-party features.
Performance
Performance cookies are used to understand and analyze the key performance indexes of the website which helps in delivering a better user experience for the visitors.
Analytics
Analytical cookies are used to understand how visitors interact with the website. These cookies help provide information on metrics the number of visitors, bounce rate, traffic source, etc.
Advertisement
Advertisement cookies are used to provide visitors with relevant ads and marketing campaigns. These cookies track visitors across websites and collect information to provide customized ads.
Others
Other uncategorized cookies are those that are being analyzed and have not been classified into a category as yet.
SAVE & ACCEPT
Go to Top